Los Angeles Central Library: A History of Its Art and Architecture 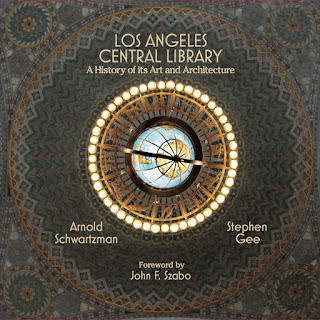 The Friends of Crowell Public Library’s Meet the Author! series begins 2017 on Wednesday, January 11th at 7:00 pm with the publication Los Angeles Central Library: A History of its Art and Architecture, written by Stephen Gee with photographs by Arnold Schwartzman.  This landmark volume not only explores the visual history of the building, but also the story that has led to the legendary Library as it stands today. The Library’s beautiful building, paintings, murals, sculptures, decor, and storied tile work are captured by the lens of renowned Hollywood documentarian, photographer and graphic designer Arnold Schwartzman.  In detail that has never been chronicled before, architectural historian Stephen Gee shares the drama of the public’s fight to save the Library on several occasions, including the heart-wrenching story of the 1986 fire that destroyed or damaged over a million volumes.  More than 250 firefighters risked their lives for the love of books, and then the citizens of the city came together to save thousands of smoke and water-damaged books. That the priceless artwork originally installed in the 1926 building was preserved is nothing short of a civic miracle. Schwartzman shows the art—and much more—in page after page of color, all juxtaposed with historic images and blueprints, many never before published.

As City Librarian John F. Szabo wrote in his Foreword to Los Angeles Central Library: A History of its Art and Architecture, “Stephen Gee provides a captivating biographical tour through the life of this Los Angeles landmark. He offers the reader insights into the motivations and competing interests of the city’s leaders, extensive details on building materials, stories of conflict between stakeholders, and even a detailed list of the fascinating contests of the building’s cornerstone. . .” Between them, Gee’s words and Schwartzman’s camera leave no stone unturned.

The Los Angeles Central Library and its history are as fascinating as any of the storied volumes found on its shelves.  Library Lovers far and wide, don’t miss this special Meet the Authors! event at Crowell Public Library.
Posted by Reference Librarian at 2:49 PM