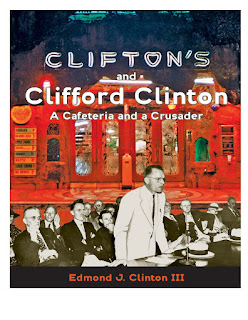 In the new biography Clifton's and Clifford Clinton: A Cafeteria and a Crusader, author Edmond Clinton III tells a riveting story of greed, corruption and humanity. His grandfather, Clifford Clinton, opened the first Clifton's Cafeteria in 1931 at 618 S. Olive Street with his last $2000 and 2,500 recipes. In 1930s Los Angeles, it was a respite for weary souls during the Great Depression and a haven for the rest of the city as well; a place that became a family tradition and a place to gather one’s thoughts, be they political or spiritual.

At the same time, Los Angeles was teeming with vice and corruption and Clifford Clinton went after it. A deeply religious man, Clinton felt it was his moral obligation to tackle these issues head-on. He believed that public servants should, at the very least, tell the truth. In his attempt to clean up Los Angeles, he made some powerful enemies: the chief of police, the district attorney, and the mayor, for starters. While on a grand jury, Clinton formed the Citizen's Vice Investigating Committee to continue his crusade, and initiated a soon-to-be-citywide campaign to successfully recall Mayor Frank L. Shaw.

This would seem to be the definitive biography of the man who changed Los Angeles for the good. And with the reopening this year of the Clifton’s Cafeteria on 6th Street, the history is even more relevant. The book includes dozens of vintage images and shared recollections from Clifford Clinton's never-published memoir. Clifton's and Clifford Clinton: A Cafeteria and a Crusader is a must-read for all Angelinos fascinated by their city’s history. Come meet author Edmond Clinton on Monday, April 11th in the Library’s Barth Community Room at 7:00 p.m. and hear some fascinating insights about his crusading grandfather.

Author Edmond J. Clinton III is the eldest grandson of Clifford Clinton. He was born in Los Angeles and raised there and in San Marino, attending Huntington Middle School & San Marino High. He worked at Clifton's Cafeteria as a teenager making a whopping ninety-five cents an hour. A graduate of Occidental College and USC Medical School, Clinton is now an internist and has been on staff at Huntington Memorial Hospital since 1978. He lives in La Cañada Flintridge.

Posted by Reference Librarian at 8:36 PM

Whether one is approaching age 65 or is already receiving Medicare benefits, attending this free educational seminar at Crowell Public Library, will be most beneficial. This hour of Medicare 101 will cover the basic rules, regulations and time frames seniors need to know. An independent broker working in Pasadena, John Dickey will present an audio-visual program on the many aspects of Medicare and will answer all questions. He will serve as a free resource and advocate, now and at any time in the future, to help people find the Medicare information they need. John’s guidance, and advocacy on behalf of seniors is always totally independent of any insurance company and is governed by CMS (Center for Medicare and Medicaid Services).
When the time comes to choose a Medicare plan, reviewing all of the options can be overwhelming. This "Medicare Made Clear" meeting will offer tools and resources that make it easier to understand and apply all of the basic rules of Medicare, plus attendees will receive a free Medicare Clarity guide book to keep for future reference. Learn the rules of Medicare, the available elections and options, how to avoid penalties, and what Parts A, B, C, D, and E are.

John Dickey has given numerous presentations throughout San Gabriel Valley on Medicare, including Arcadia, Altadena and Monrovia. He frequently attends insurance training seminars and classes to stay current on all government regulations and available plan options. He is a fully licensed certified Health Insurance Planner, has an MBA, and has lived in San Gabriel Valley for 20 years.

Don’t miss this opportunity to get all your questions on Medicare answered.

Posted by Reference Librarian at 2:51 PM