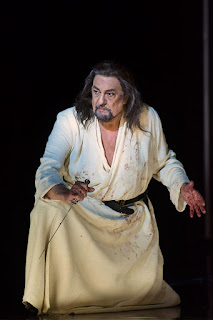 The popular LA Opera Talks return to Crowell Public Library on September 11th with Verdi’s Macbeth, followed by Philip Glass’s Akhnaten on October 9th.  LA Opera Talks are programs presented by community educators featuring fascinating facts and musical excerpts from the operas that are playing downtown at the Music Center.  Opera is not just magnificent music.  It is dance and theater with astounding sets on a beautiful stage. It can sweep you away to foreign lands, take you back in time, dazzle you with pageantry and bring history to life.  It is literature, social studies, cultural diversity, multiple languages and most of all, it is exciting!

Sunday September 11th at 2:00 p.m. learn all about the LA Opera production of Macbeth, featuring Giuseppe Verdi’s music, and of course, Shakespeare’s story:  how can one go wrong with this dark political parable?  A victorious general returns home from battle and encounters a coven of witches who predict his future — he will become king of Scotland. Blinded by ambition, and spurred on by his power-hungry wife, Macbeth commits multiple murders to attain and keep the throne. Verdi's score elevates the tragedy and horror through electrifying vocal lines and propulsive energy.


With a powerful, mesmerizing score by Philip Glass, Akhnaten depicts the ancient Egyptian pharaoh with driving rhythms and exquisite choral harmonies.  Akhnaten ascends to the throne along with his bride Nefertiti. He has a vision for his people, a vision that abandons the worship of many gods for just one: the Sun God who reigns supreme. Akhnaten's bold attempt to alter the course of history with a single revolutionary idea ultimately leads to his violent overthrow.

Explore the world of opera through LA Opera’s education programs. Opera has something for everyone. Come early as seats are limited, but open to all opera aficionados and first timers.

Posted by Reference Librarian at 12:37 PM