Talk About a Fiery Diva! 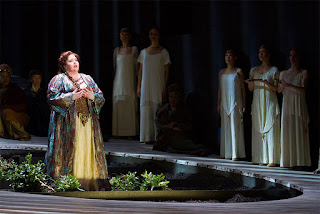 On a mountaintop in a Druidic temple during the Roman occupation of Gaul, a clandestine love affair brings two mortal enemies together during a time of war. The pagan priestess Norma discovers that her beloved now loves another, and a fiery new battle begins as betrayal, anguish and fury take the reins. Norma delivers an overwhelming feast of vocal fireworks. It is a tragedia lirica or opera in two acts by Vincenzo Bellini with libretto by Felice Romani after Norma, ossia L'infanticidio by Alexandre Soumet.

LA Opera Community Educator Ron Streicher, will use examples from three live-performance recordings to examine just how each of those sopranos demonstrates her 'divadom,' when he leads this LA Opera Talk at Crowell Public Library, Sunday, November 15th at 2:00 p.m. Norma debuted at La Scala Opera House in Milan in 1831, although the premiere was greeted with a less than enthusiastic response from the audience. The opera is now regarded as the ultimate example of bel canto. From her opening aria, "Casta diva," through to the opera's fiery conclusion, the title role challenges the range, vocal dexterity, endurance, and dramatic capabilities of every diva who dons the mantle of this Druid priestess.

Ron Streicher began his career in music as a pianist, percussionist, and choral conductor. His love for opera was kindled while playing tympani in the pit orchestra of the UCLA Opera Theatre and rapidly grew to an overwhelming passion. His career as an audio engineer has afforded him the opportunity to work with the touring companies of the New York City Opera and Metropolitan Opera, and the Aspen Music Festival and School, where he served as the recording engineer and sound designer for more than fifty opera productions.

Opera has something for everyone. It can sweep you away to foreign lands, take you back in time, dazzle you with pageantry and bring history to life. It is literature, social studies, cultural diversity, multiple languages and most of all, it is exciting! Come explore the world of opera for free through LA Opera’s education programs at Crowell Public Library!

Posted by Reference Librarian at 3:42 PM